Questions about The Voice, Pt.2

5. How much time did you get to spend with the Coaches?

Quite a fair bit of time, but obviously we didn’t hang out with them all day every day. We had a night out with our Coach plus individual Coaching Sessions where we could ask for advice and just have a good ol’ chat.

We also got a fair bit of vocal coaching, which was one of the best things about the whole experience imo.

6. How did you feel about your Battle pairing and song?

I didn’t expect to be paired with Sasha but upon reflection I think it was a smart decision. Both Sasha and I didn’t manage to deliver 100% at our auditions (Sasha due to stage fright, me due to exhaustion) and I suspect Sir Tom shrewdly estimated that we might be able to help each other to reach our full potential in the Battle.

I was delighted to get to work with Sasha because we get along really well, but I could tell even then that Sir Tom had a vision for her (which he has since demonstrated clearly) so my chances of winning the Battle weren’t great. After we got the song, I figured I’d almost definitely need a steal if I was going to go any further because it was a lot more Sasha’s style than mine, but regardless I actually really liked the song choice – it’s a classic for a reason! We had a lot of fun with it and made it our own.

7. Do you wish you had been more ruthless in your Battle?

I’ve had this question a few times and every time it comes up I’m deeply saddened. It’s very easy to answer: no.

Sasha is my friend and she was hurting. It’d never even occur to me to try to “play on” that or to not offer comfort when I knew I could. Even if Sasha was my worst enemy, it wouldn’t occur to me. I never want to be someone who puts selfish ambition before basic human decency.

At the end of the day, there are more important things in life than going a step further in a singing competition, and I don’t regret my choices for a second. /climbs down from moral high horse When you’re as small as I am, these count as high horses

8. Will you go back to The Voice or another TV talent show in the future?

I don’t plan to, but I always keep an open mind.

Ending up on The Voice in the first place was kind of an accident for me, but an opportunity I’m absolutely delighted I got to take because it could turn a much loved hobby into potentially, at the very least, a part-part-time career…

Plus OOYL, or whatever it is the kids say…

But I don’t feel the need to do it again. It was just perfect as it was.

If I was invited to take part again or scouted for something else I’m not saying I wouldn’t go for it, but it’d be a considered decision. It’d need to have at least as much integrity and respect for the artists as The Voice does, and it would entirely depend on the circumstances of my life at the time, just as it did the first time.

9. Do you have any favourites from this year’s show?

This is a difficult question to answer because there were people I spent almost every minute of my days with (e.g. Sash) and people I only said “hi” to once, and that obviously has a massive impact on your emotions.

Plus, Matt Eaves was freaking awesome and I can’t believe he didn’t get a turn.

10. Do you write your own material?

Yes, I’ve been writing songs since I was about 8 years old and I’ve always considered myself a singer-songwriter, not just a singer. 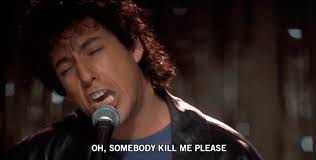 If you haven’t heard it yet, check out my new E.P. ‘Liminal’.

11. Do you play any instruments?

Yeah I play guitar, fiddle, and a little bit of piano.

I was in a fiddle group called Fiddle Attraction. Oh yeah!

I have a few more questions left that I haven’t answered, but they’re mostly about future plans, so I’ll get to them next time. Until then, have a lovely Sunday!